The Origins of the Palestinian Flag 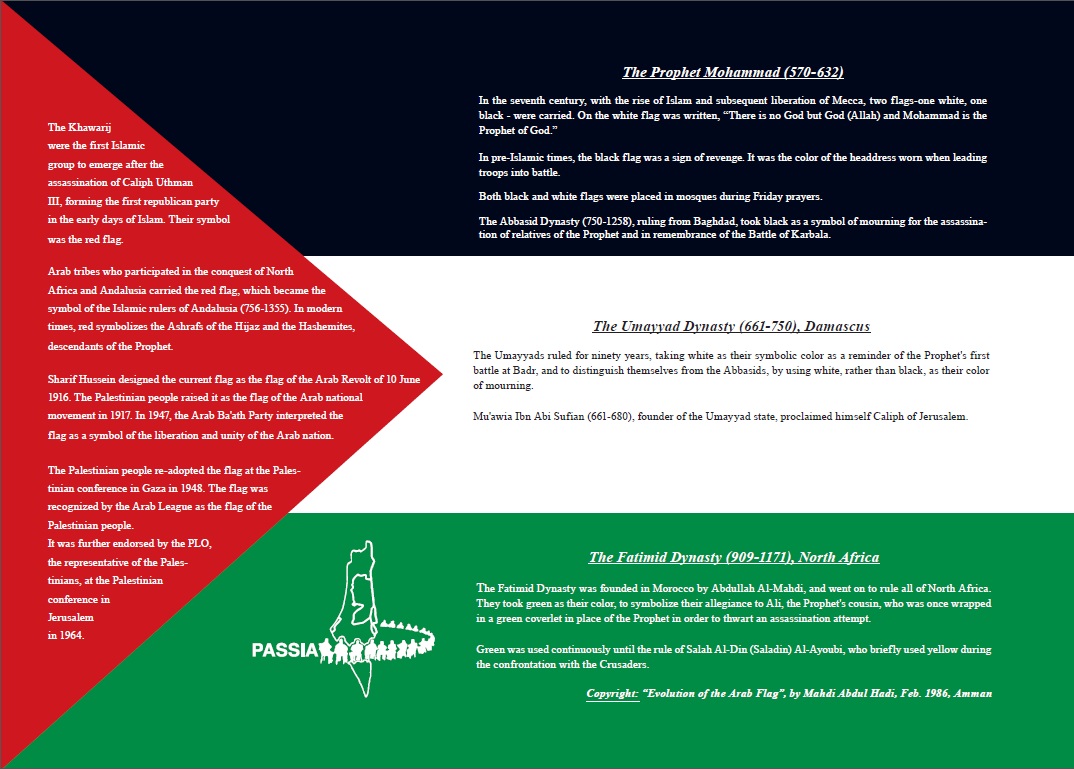 In the seventh century, with the rise of Islam and subsequent liberation of Mecca, two flags-one white, one black - were carried. On the white flag was written, “There is no God but God (Allah) and Mohammad is the Prophet of God.”

In pre-Islamic times, the black flag was a sign of revenge. It was the color of the headdress worn when leading troops into battle.

Both black and white flags were placed in mosques during Friday prayers.

The Abbasid Dynasty (750-1258), ruling from Baghdad, took black as a symbol of mourning for the assassinationof relatives of the Prophet and in remembrance of the Battle of Karbala.

The Umayyads ruled for ninety years, taking white as their symbolic color as a reminder of the Prophet's first battle at Badr, and to distinguish themselves from the Abbasids, by using white, rather than black, as their color of mourning.

The Fatimid Dynasty was founded in Morocco by Abdullah Al-Mahdi, and went on to rule all of North Africa.

They took green as their color, to symbolize their allegiance to Ali, the Prophet's cousin, who was once wrapped in a green coverlet in place of the Prophet in order to thwart an assassination attempt.

Green was used continuously until the rule of Salah Al-Din (Saladin) Al-Ayoubi, who briefly used yellow during
the confrontation with the Crusaders.

were the first Islamic group to emerge after the assassination of Caliph Uthman III, forming the first republican party in the early days of Islam. Their symbol was the red flag.

Arab tribes who participated in the conquest of North Africa and Andalusia carried the red flag, which became the symbol of the Islamic rulers of Andalusia (756-1355). In modern times, red symbolizes the Ashrafs of the Hijaz and the Hashemites, descendants of the Prophet.